86 Year Old’s Angry Letter To Bank Will Get Us ROFLL!!

There are often times when banks have us all go  irritated with extended customer support and other facilities .Such are the times when technology seems an annoyance to every soul.A similar case happened with this 86 year old lady and it seems she got back to them in an equally tiring way. What more when the letter reached the Manager of the bank even he thought it was rather funny and instead of getting all fussy about it he decided to share it instead to have a healthy dose of laughter.

The chimes of  press #1 for this press #2  is the most annoying reply ever.Just when you think you have pressed the right option and about to get somewhere, that option will again have a number of options. The ultimate place the calls land is to the customer support executive and you often wonder why all the maze for it.

The banks and their multiple call options

This woman’s cheque bounced due to insufficient funds and the angry letter she wrote to the bank defined the anger in a hilarious way. The perfect way she explained the problem to them in a similar format to the customer care calls is awesome.

When the old lady’s cheque bounced

She started with explaining how she issues a cheque to her plumber and it bounced due to insufficient funds.It was just nanoseconds between crediting and debiting the account and she appreciated the bank for not even a seconds delay.

It was her monthly pension cheque 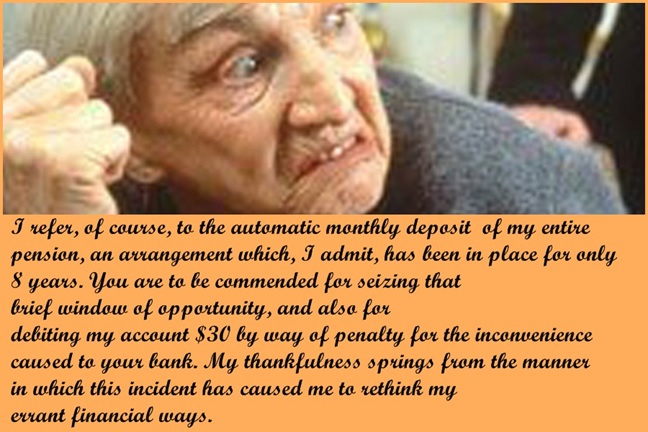 She thanked and appreciated the bank for seizing opportunity of getting a $30 fine from her on account of bounced cheque just for a brief second of time and that the event made her rethink of her errant financial ways.

Irritated with the OPTIONS

She hilariously explained that how she personally answers the calls unlike the ones the bank answers.She further went on explaining how she will pay her errands in a rather old fashioned way and not through electronic transactions.

These Hilarious Moments When Guys Recreated Every Instagram Posts

SAM Jun 14, 2017 0
Imagine  what if every girly Instagram posts were to be recreated by guys, how hilarious that would be! Read the…
Entertainment

Interesting! The Important “Game Of Thrones” History You…

14 Hilarious *Closed Caption* Fails That Will Crack You Up!